Hand Me a Sandwich and a Bid Please! By: Claire Ollila

Once upon a time in the sandwich line of Ritchie Marketplace, I met a girl donning letters on her shirt who suggested I rush for a sorority here at Adrian College. As a girl who firmly believed the anti-Greek life stereotype and never thought of touching it with a ten-foot pole, I gave her the polite, "Sure, I'll think about it." A few days later, I hesitantly agreed to go through recruitment with one of my good friends under the strict pretense that I would not be joining a sorority, but rather I would just be keeping her company. I had assumed that these awful sorority girls would only try to impress us by how classy and perfect they all were, but this was not the case. Before I knew it, I was bawling my eyes out at Alpha Phi's preference party during a heartwarming ode to the night two girls awoke their entire chapter during a hilarious midnight screaming match over cheese. The story was silly and the context was totally off, considering how formal the party's setting was, but the sentiment behind it was undoubtedly genuine. What I never predicted was that instead of wanting to join Alpha Phi so that I, too, could be classy and fabulous, I'd want to join because I felt like I already belonged. The girls giving this goofy yet sentimental speech were seniors, and it was very evident that something had happened during their previous three years to make them not want to say goodbye. And although I didn't quite understand what that something was, I knew in that moment that I wanted it. I longed to love something so much that it makes saying goodbye so hard. 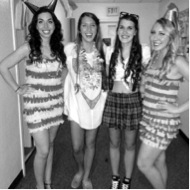 Sure enough, here I am not even a year later and I've fallen head over heels for Alpha Phi. It was a slow process at first, learning the terms, meeting so many new faces, getting the hang of new routines. Why did all these girls love me so much already, anyways? We had just met, like, a week ago. Better yet, why did I already love them so much in return? 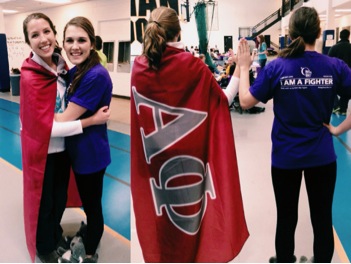 My best attempt at an explanation is that in the midst of an uncertain transition from high school to college, I'd already found a home. I found people who not only welcomed me with open arms (literally and figuratively), but also encouraged me every day to be my best self. This means staying on top of my schoolwork while also knowing when it's okay to relax and have fun. It means holding myself accountable for the responsibilities I take on and the promises I make. It means seizing opportunities and testing new waters so I can allow myself to learn and grow. Through Alpha Phi, I have found unexplainable joy in the silliest ways, and I have learned my own strength during the toughest of times. I've made the very best of friends in places that I otherwise would have never looked, and I am confident that this could not have just been a fluke. This was most certainly fate. Alpha Phi has given me a home, a family, a set of values I believe in, an unbelievable number of valuable leadership opportunities... and to think, it all started in the sandwich line.

Phi love and all mine, Claire Ollila

Oops, you forgot something.

The words you entered did not match the given text. Please try again.

Reply Ashley Welch
11:54 AM on August 15, 2015
I'm so happy you found your home and I'm sure you're a beacon of positive energy to younger girls as well. Very well written great grand baby. AOE